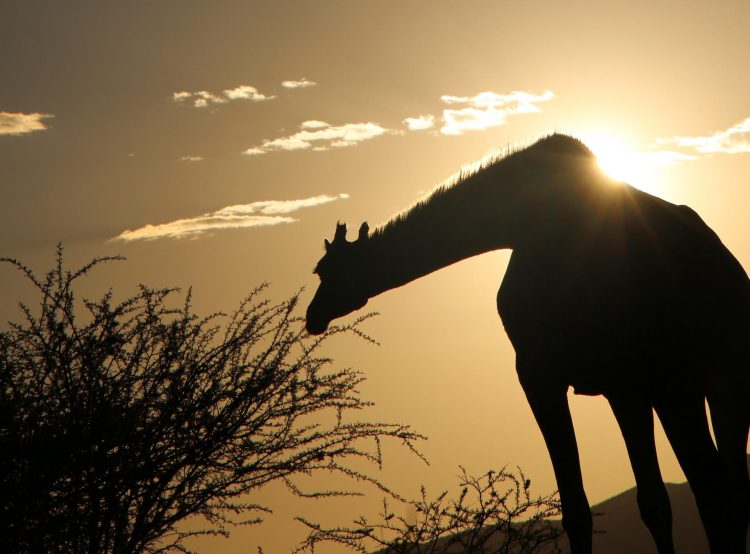 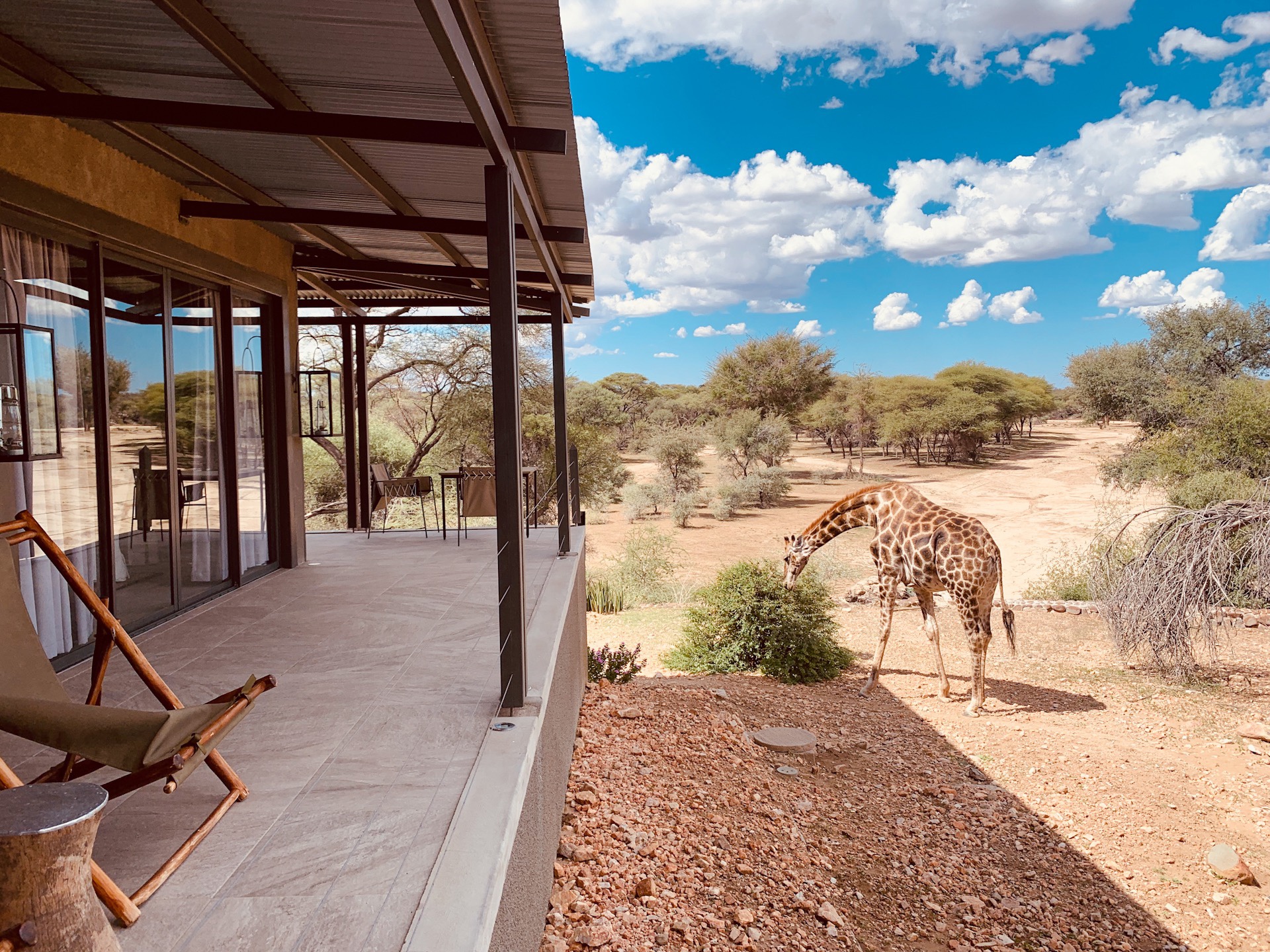 There was talk of a tall, handsome man about town roaming the wilderness of Epako Safari Lodge in Omaruru, Namibia, where we found ourselves one April afternoon. The man went by the name of Oscar. Oscar Wilde in the wild. Yet, he was in fact not a man, but a giraffe, and not a he, but a she.

Oscar’s name was given to her more in the way of Johnny Cash’s song, “A Boy Named Sue”, than any traditional gender-appropriate naming strategy. And in case we were in any doubt, there was proof. When we arrived at the lodge, Oscar had just given birth. For the second time.

Where her infant was we did not know. 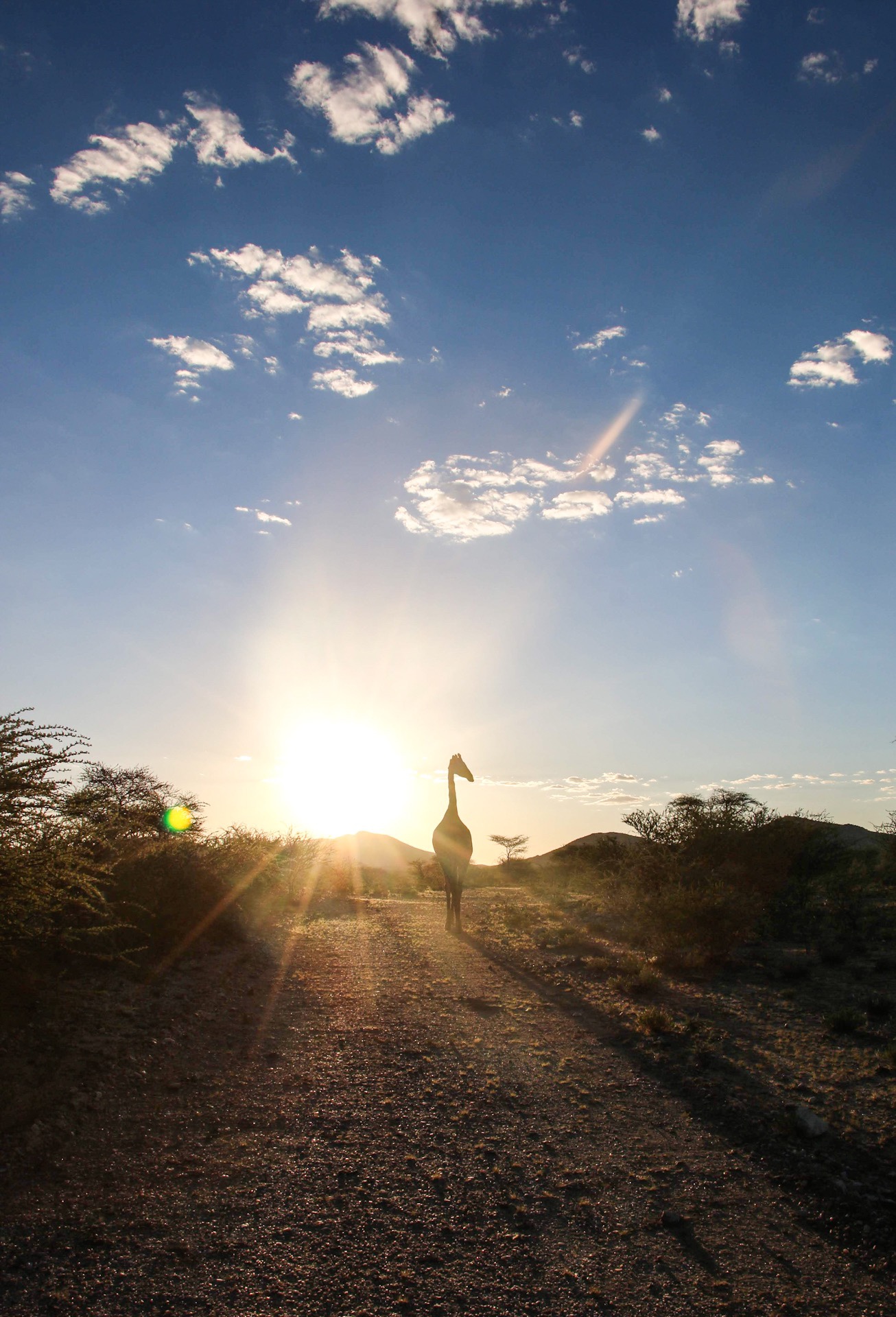 Just as she was eluding my gaze so was she hiding her new-born in a secret location out in the 11,000 hectare private reserve at Epako, while she went about the duty of the foraging flâneur, eating furiously from every bush that passed her approval, to provide her with the energy, strength and nutrients to breastfeed. Oscar the She made it quite clear: she worked on Oscar time – a sign of her innate wild spirit, in spite of her upbringing.

You see, the story of Oscar’s beginnings is not an ordinary one. In 1996, Oscar’s mother died during labour and little Oscar was found in the bush by caretakers at Epako, here on the border of the Damaraland region, midway between Windhoek, Swakopmund and the Etosha National Park. 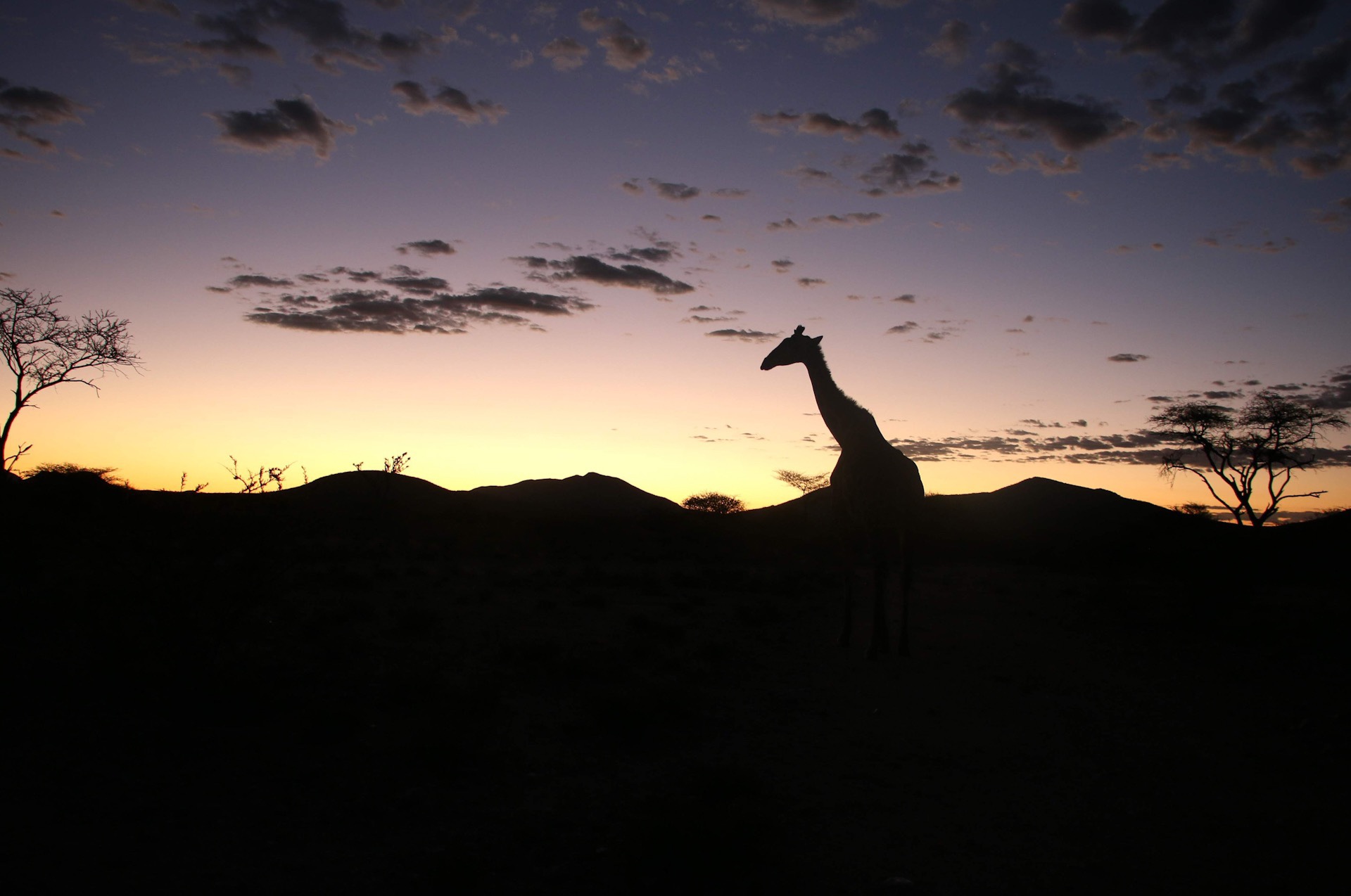 The men took little Oscar in, bottle-raised and cared for her in a small private boma, away from other animals, for her protection.

When she was taller, stronger and able to stand on her own two (four) feet, it was time to reintroduce her into the wild. Because she had become used to humans, this rewilding proved to be a process.

After the lodge tried to release her into the bush, she simply walked back home. She wanted her private deck and landscaped garden. 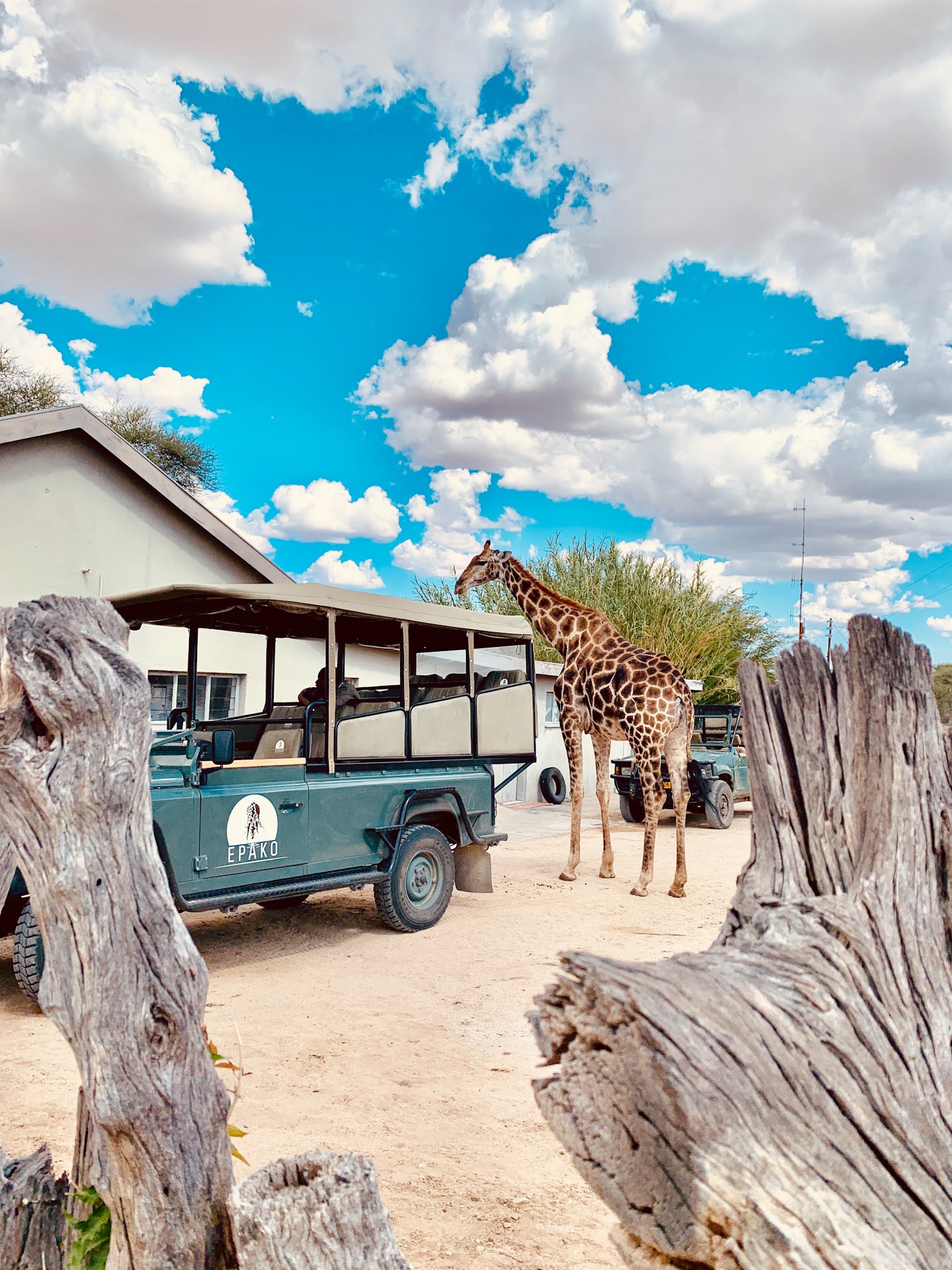 This called for a new strategy! Marcelino, the head gardener at the time, began taking Oscar out on frequent walks into the reserve, and leaving her there… A vehicle would meet him and return him to the lodge. This helped Oscar become more and more comfortable with being alone and in the wild, to get in touch with her wildness.

Eventually Oscar would stay out in the wilderness for longer and longer periods, until she made it her true home, visiting the lodge only on occasion – not out of need, but more for a friendly visit, on her forages. It’s clear, from photographs that I had seen before my trip, that she felt quite at home around the lodge still, gleefully accepting snacks from seed-wielding hands and pockets (the best kinds of hands and pockets) of staff and guests.

Still, I had not witnessed this, nor her, for myself. I arrived back at the lodge after a game drive one late morning, and was excitedly told, “Oh, you’ve just missed her!”

The talk of the foraging flaneur continued! How was I to believe the story without even a glimpse of the protagonist?

And then it happened. One afternoon between adventures, she came to see me at my room. I had put in the request and there she arrived, happily grazing in the garden of indigenous, carefully, lovingly-grown fauna. I stepped out onto the verandah and sidled right up to her. International lady of mystery (her, not me).

In the quiet stillness of a hot Namibian day, we stood across from each other for a minute or two. I held out my own seed-wielding hand (Camelthorn seedpods – Acacia erioloba – are a favourite of giraffes). Her curious snake of a tongue retrieved it and then moved on. I was just another bush to her. But she was so much more to me. 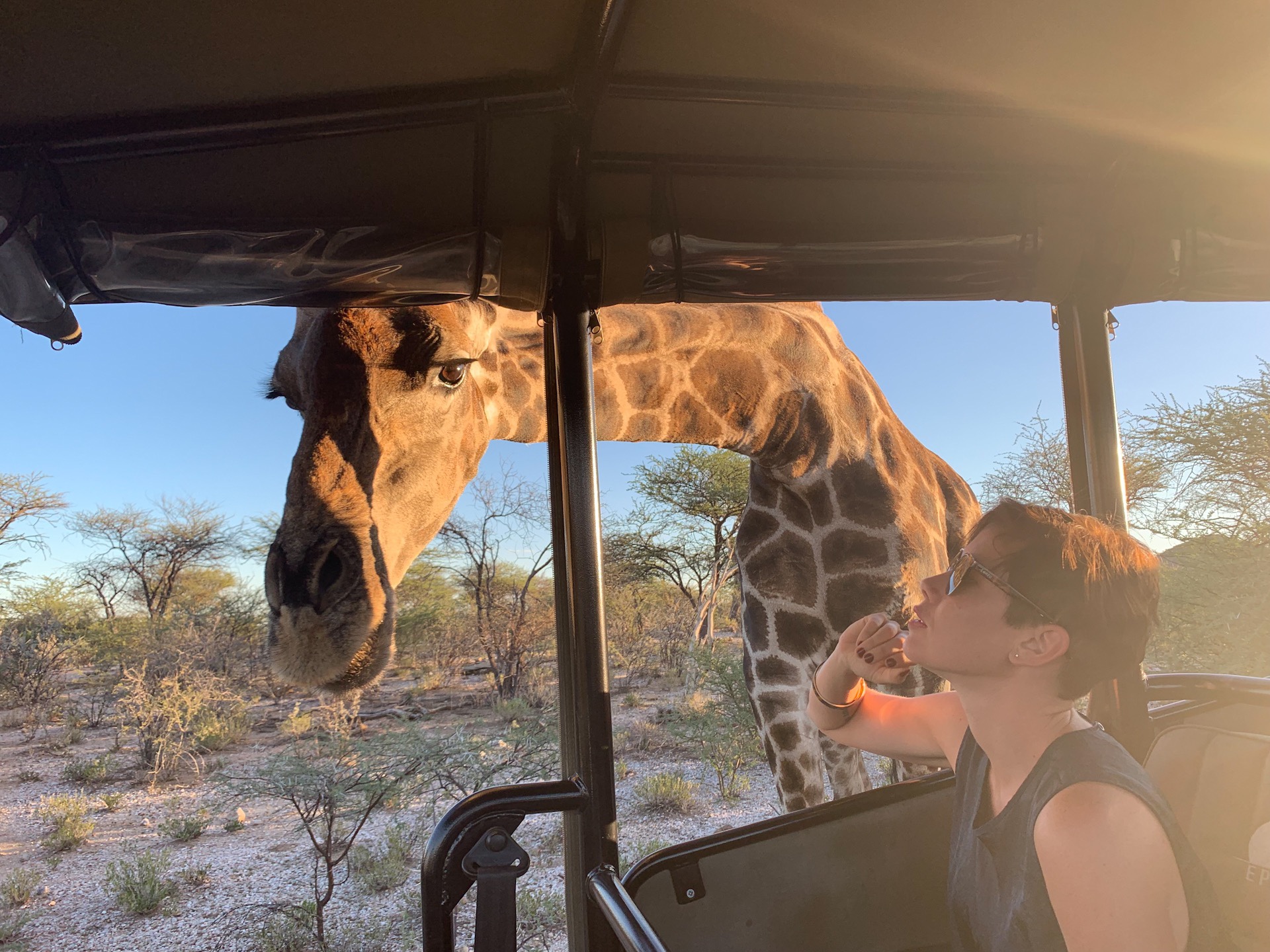 Now – for baby Oscar! Our search took us deep into the reserve one evening, just before dusk. Driving over the gravel roads, we passed wilder giraffe and their young, but no baby Oscar. Instead, mother Oscar stepped out into our path abruptly as we were searching the expanse through binocular. She stopped, right between us and the setting sun, creating the most regal of silhouettes, a grand portraiture of the protective mother by night, foraging flâneur by day. 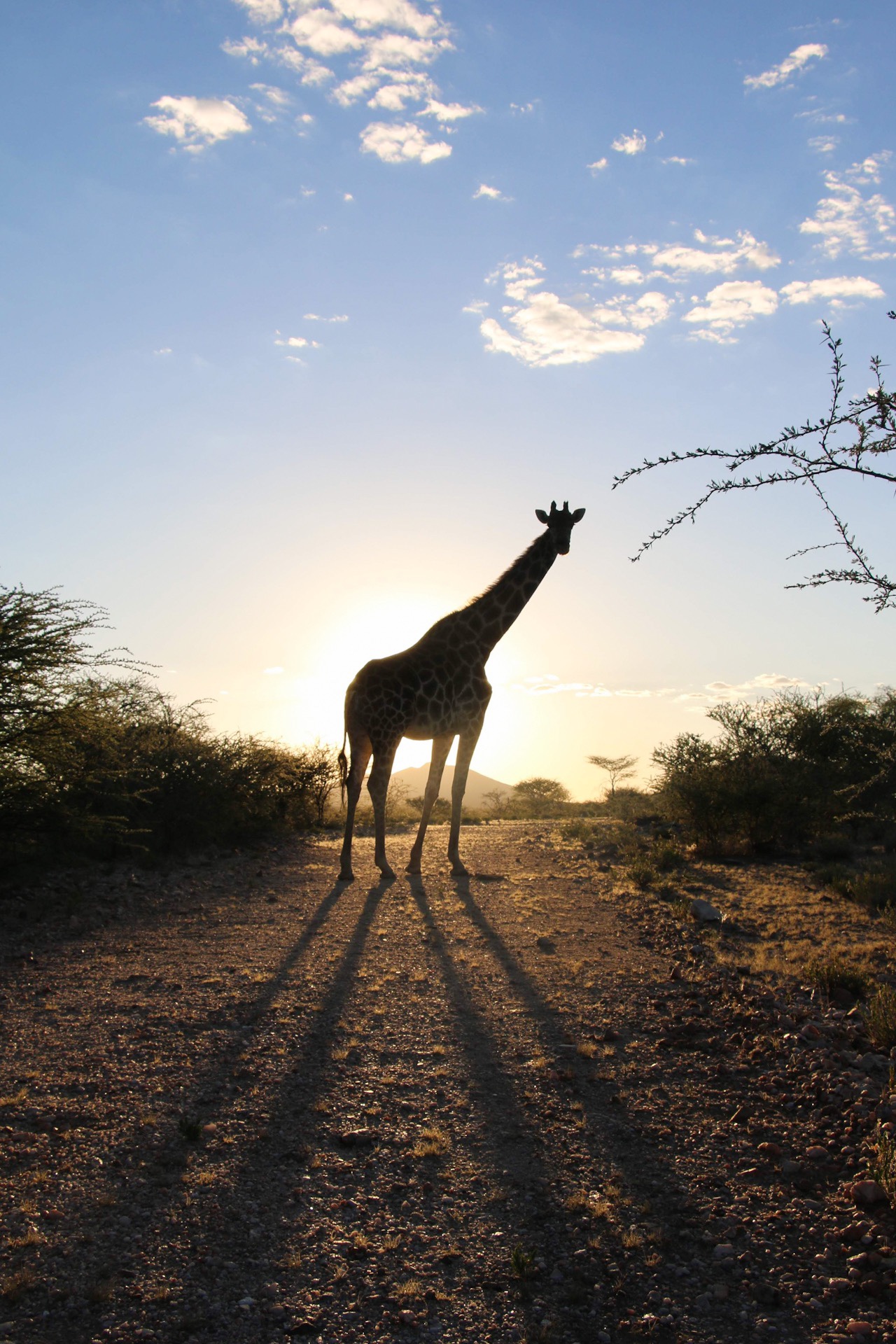 No doubt this was a clever ploy to distract us. Clearly her wild instincts were well-established. But not so stoic was she that she could turn down one more seedpod. Over to us she ambled and licked up our offerings, before turning and walking off into the sunset. 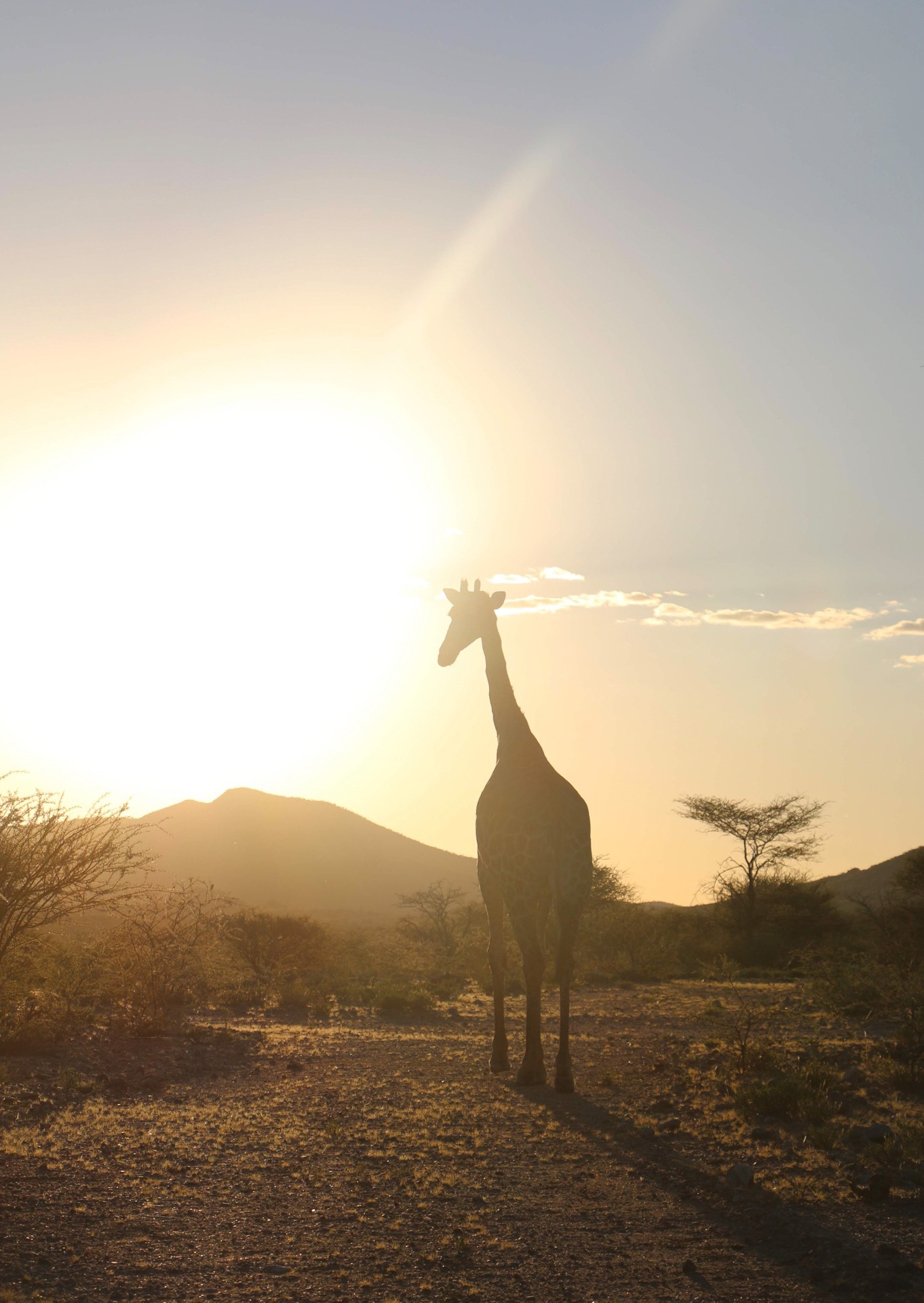 Take a look at more images below and discover more about Epako Safari Lodge & Spa here.

Thank you, Oscar and the kind people of Epako for sharing your wilderness with us. 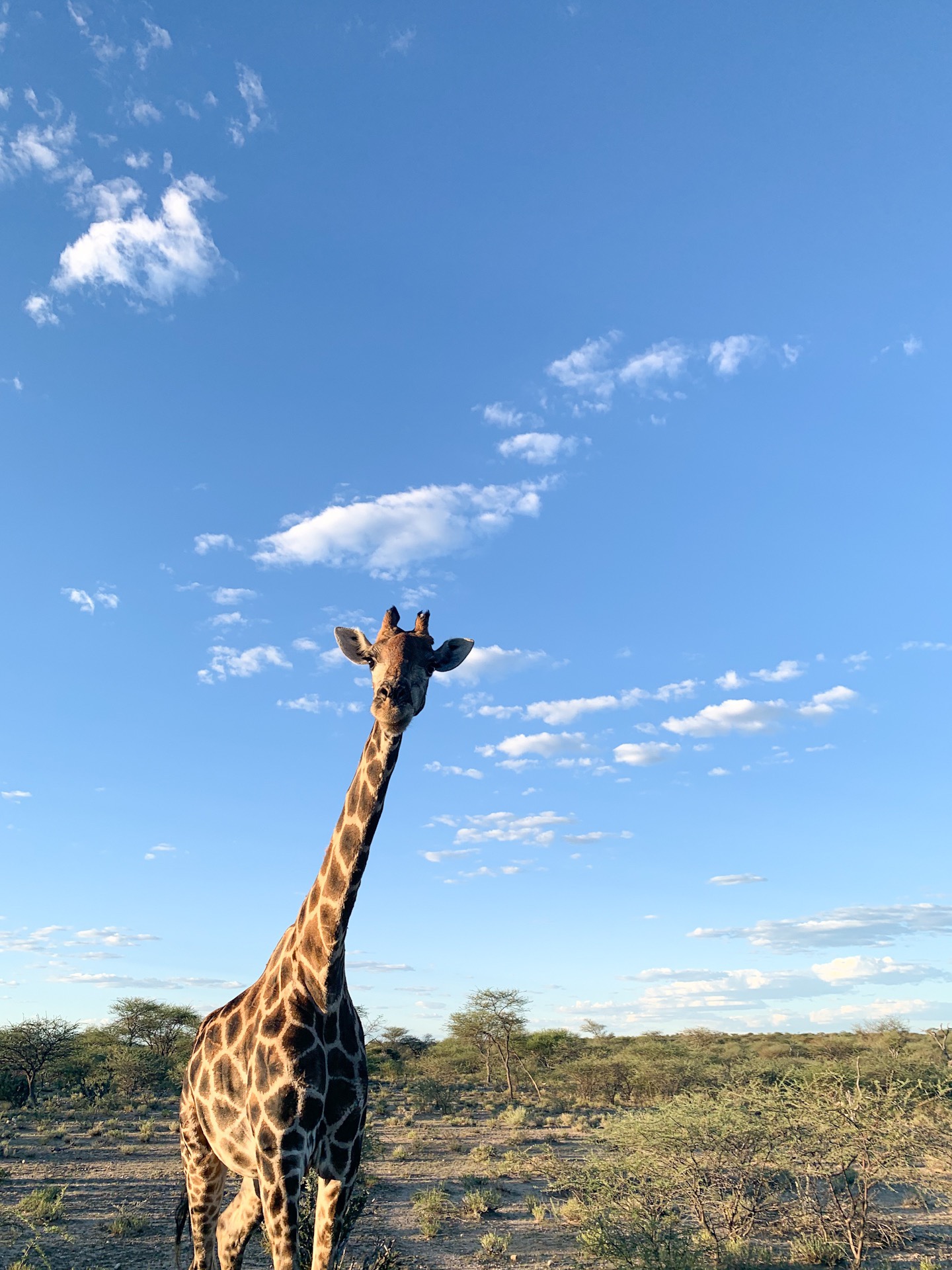 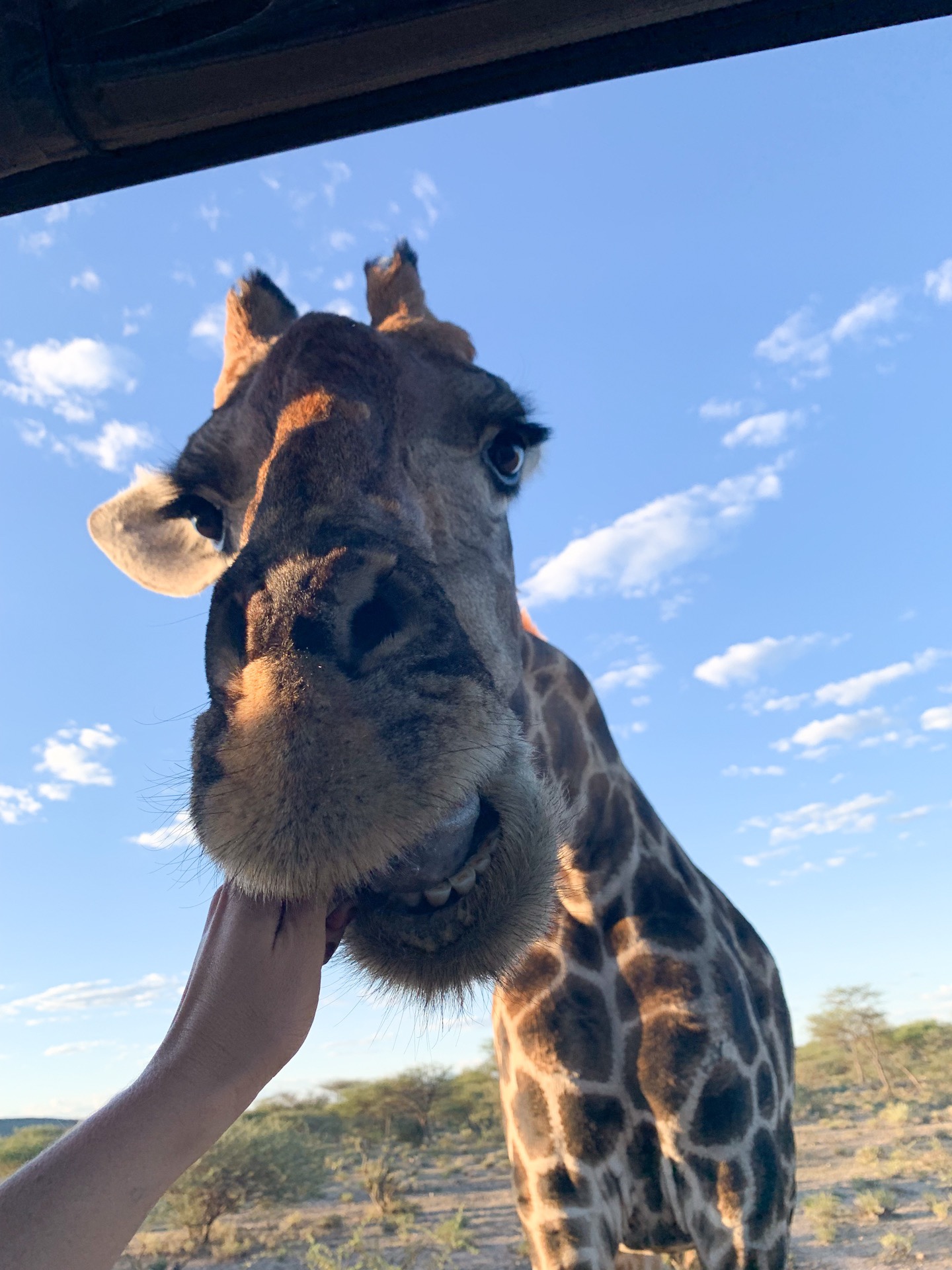 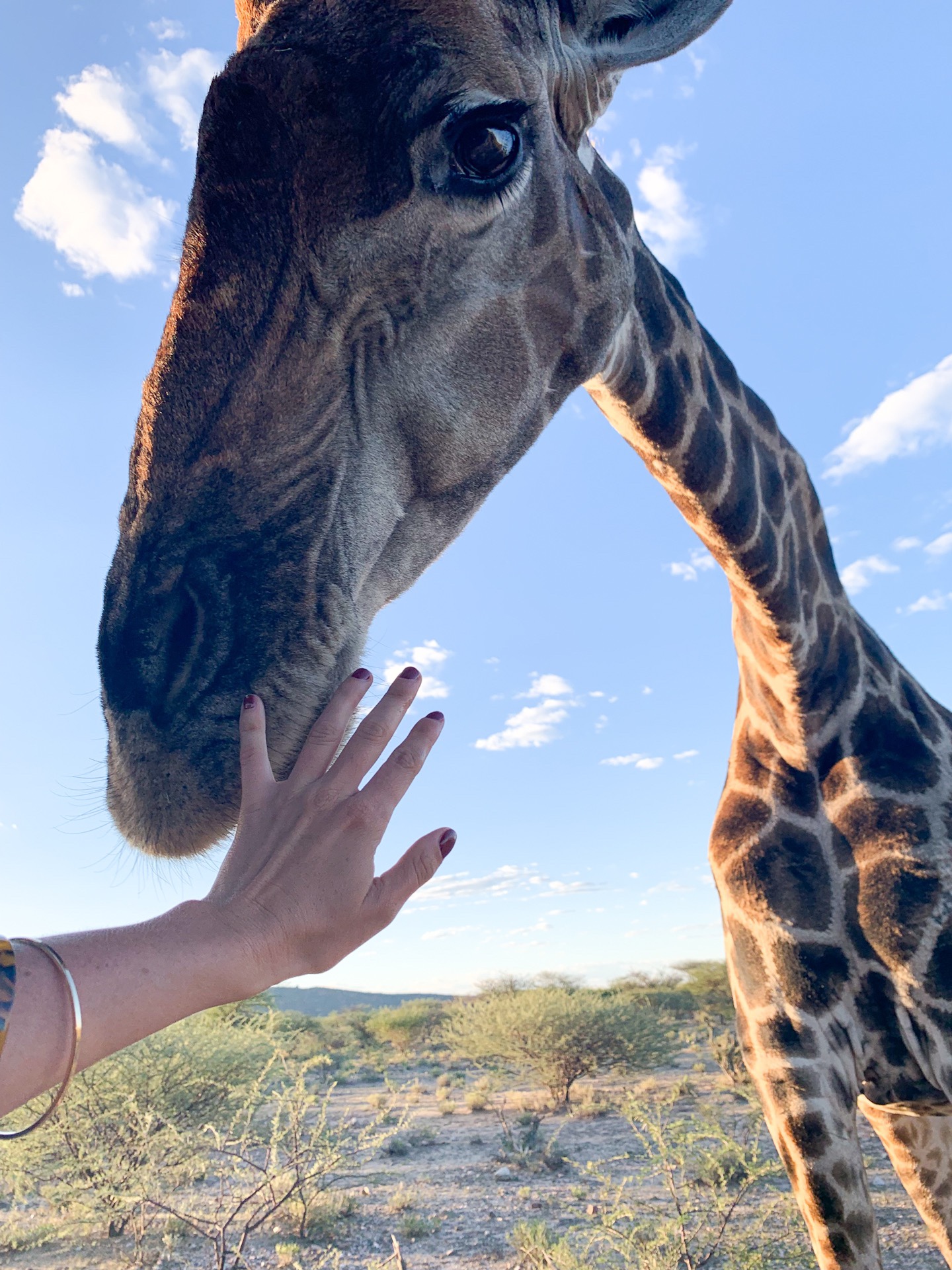 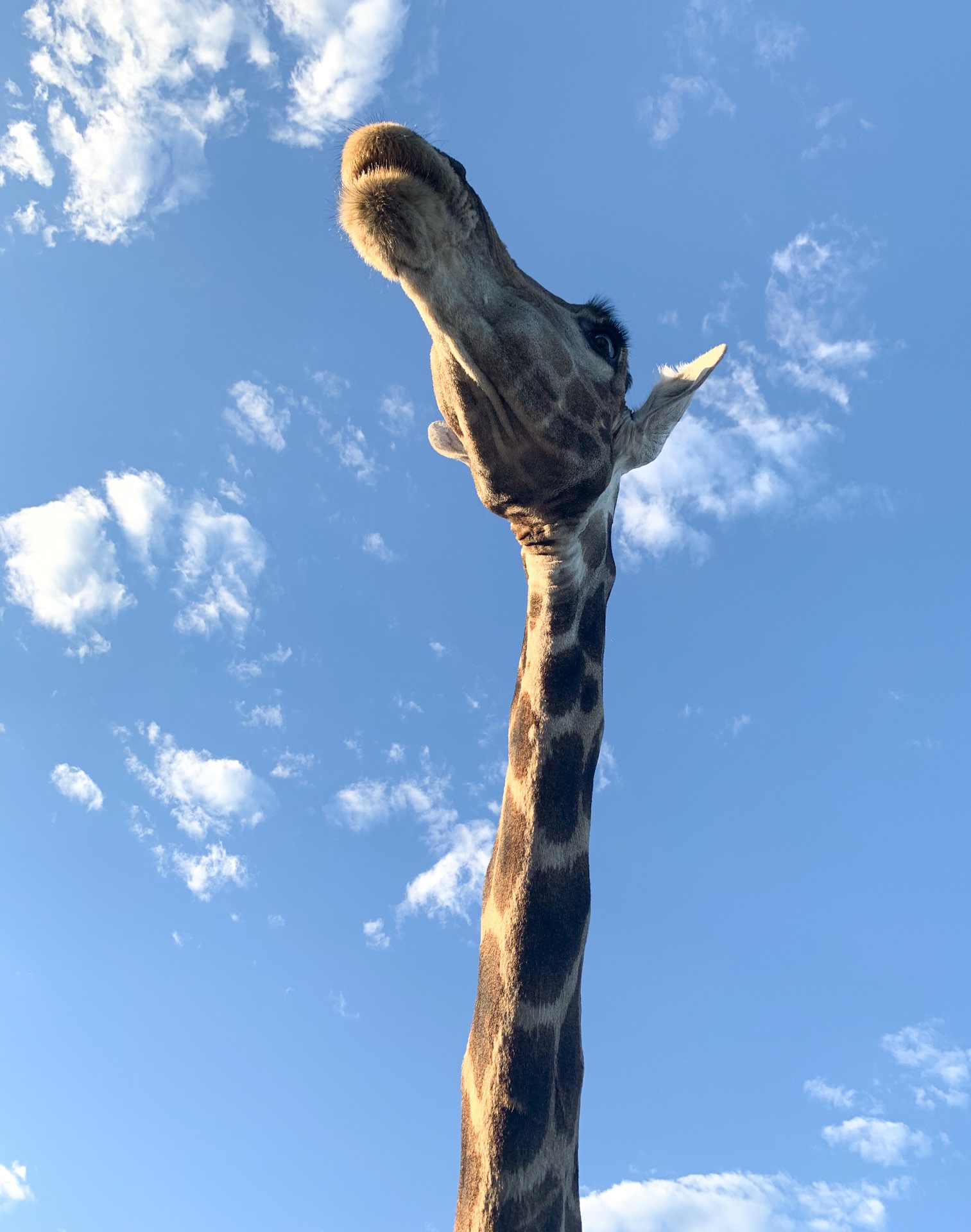 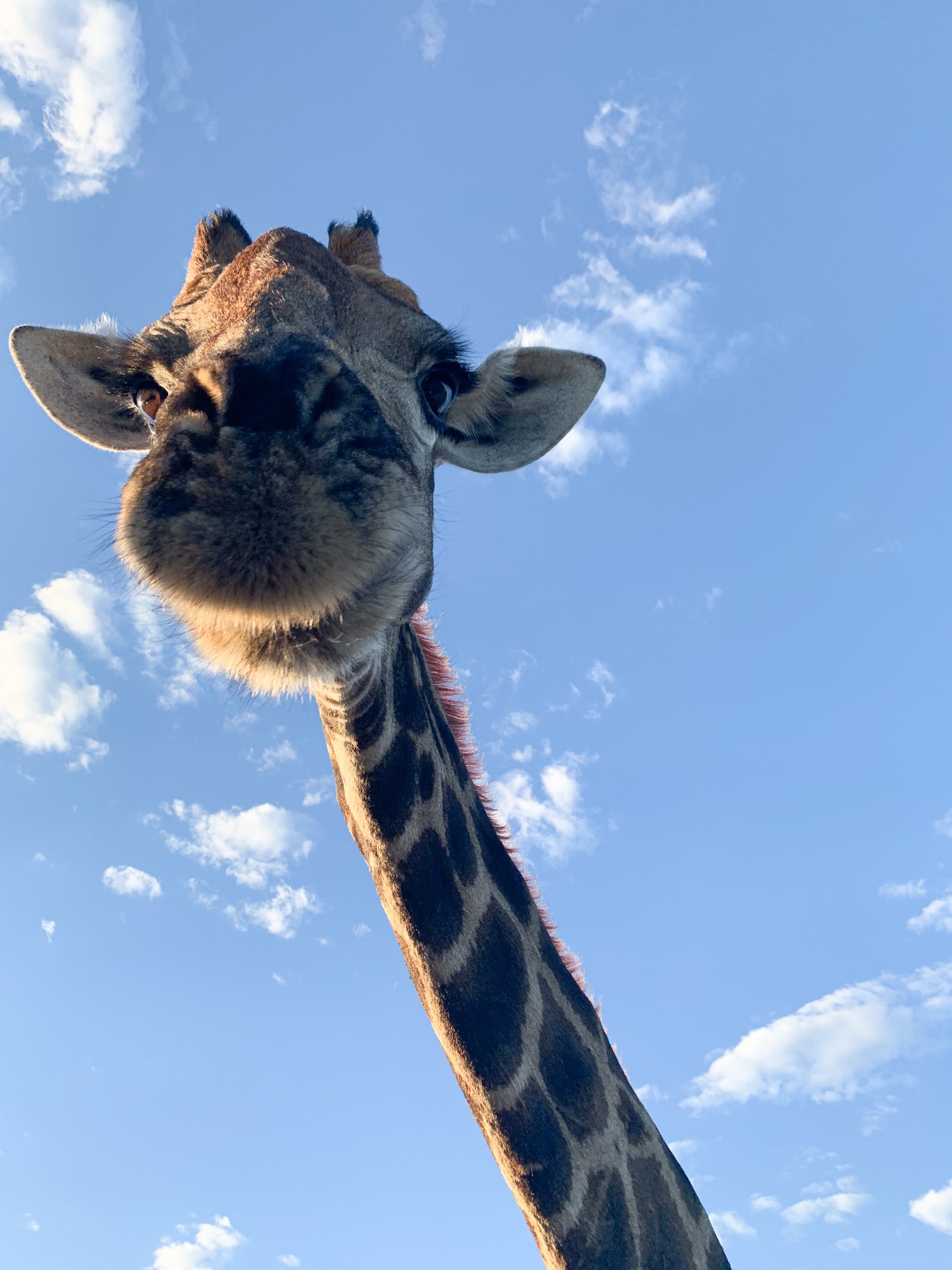