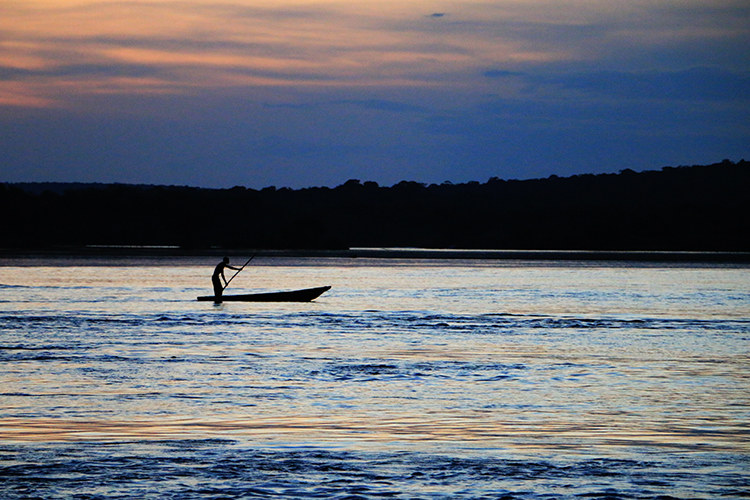 Home, is where I want to be
But I guess I’m already there
I come home, she lifted up her wings
I guess that this must be the place

We all have a place. A simple name on a map that we have traced with our fingers more often than any other name. A place in the country or city, the sea or river, jungle or forest, a place of snow or sand, water or rock. A place that has, over the years and the holidays, taken on a sort of humanity, an intimacy, a nature beyond how most of us see, well, nature. It’s not uncommon, either, for such places, these special enclaves that pull on our hearts a little more than others, to be seen as something living, something more like a friend, like family. The Whanganui River in New Zealand and the Yamuna and Ganges rivers in India, for instance, were granted human status and named “living entities” this year. By law.

But it isn’t only for their significance, their sensitivity, their vulnerability and their beauty (all qualities seen in the best of people), that we hold them close. It is also the time we have spent with them, getting to know them. The days and nights spent as witness to their different sides and moods, their ups and downs. 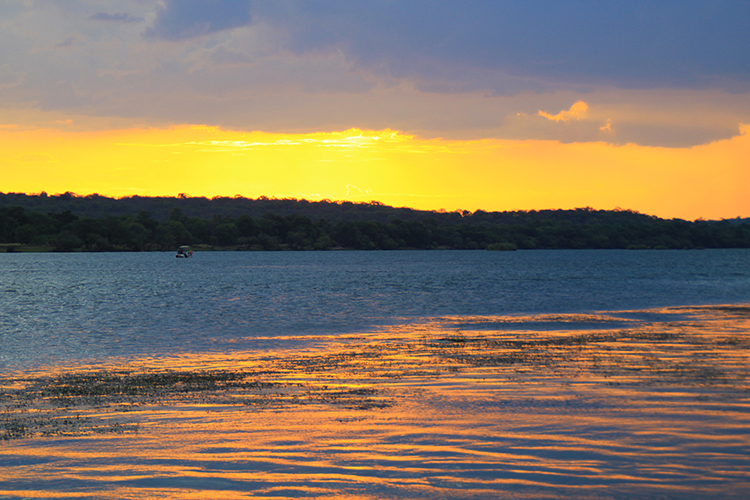 We all have a place that we have bonded with more than any other, that we understand more than another, and for me that place is the Zambezi. A river no less human than the Whanganui or Yamuna or Ganges. A river no different to you and I. An individual that breathes, that ebbs and flows with nature, and that needs protection.

Of course, the Zambezi is vast and I am not familiar with it all. It is the fourth-longest river in Africa and the largest river flowing into the Indian Ocean from Africa. It passes through six countries on the way, a true adventurer at heart. Its journey begins in north-west Zambia, in a marshy black wetland in the centre of the Miombo Woodlands, and continues on through Angola, Namibia, Botswana, Zimbabwe, and Mozambique. If you can, imagine 1,390,000 square kilometres, slightly less than half the basin of the Nile, and you will start to grasp its immensity. 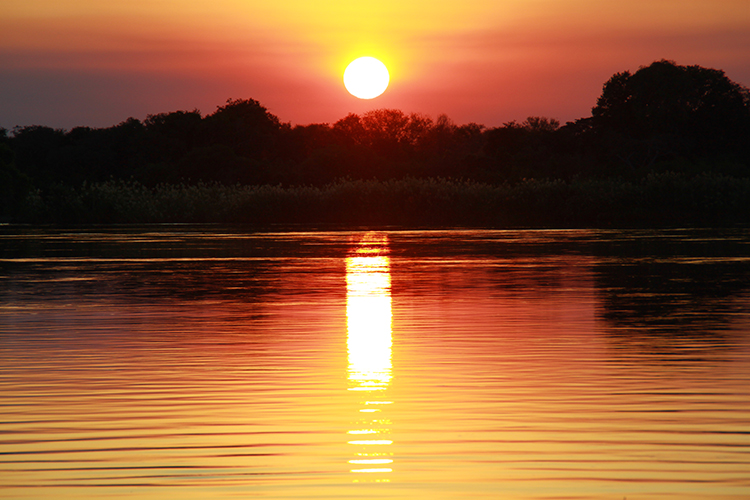 I’ve played in the lower Zambezi, while white-water rafting over rapids ranging from Grade III to Grade V – the highest commercial grading possible. Rapids with names like The Devil’s Toilet Bowl, The Gnashing Jaws of Death, Morning Glory, Oblivion, and The Ugly Stepsisters. I have helicoptered through the deep gorge, over the great Victoria Falls itself, and swum in the tiny natural infinity pools on the edge of the cascade – both Devil’s and Angel’s Pool. But it is the upper stretches of the river, before it tumbles over the Falls, that I know best. In particular, those private 15 kilometres of waterway flowing past Royal Chundu in the district of Katombora. 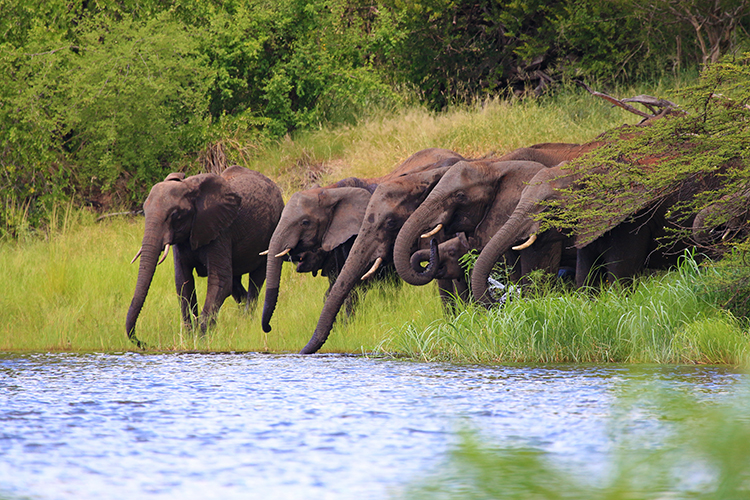 Of course, those 15 kilometres cover a body of water that is always flowing, always changing. I never quite meet the same river. But here, hugged by the same riverbank as always, its essence never changes. It feeds and is a home to the same life – the elephant herds, the hippo pods, the tiger fish and parrot fish and bream, the crocodiles, the African skimmers, African Fish Eagle, Rock Pratincoles and Schalow’s Turaco, the water buck, otters, baboons, buffalo, zebras, and even the occasional leopard and lion. Its sunsets and rises are a constant as are its channels, rising or dropping in level perhaps from time to time, but reliable in their permanence, letting us navigate the river better, more closely, and cautiously.

This is my place. And over the years I have come to not only know but to feel deeply for the people in and around Royal Chundu. The local people who understand the Zambezi much more than me, who teach me, with each visit, not only more about the water, the wildlife, the birdlife and the plants, but about compassion, patience, loyalty, respect and resilience. Those human qualities that I don’t doubt the Zambezi played a hand in refining. 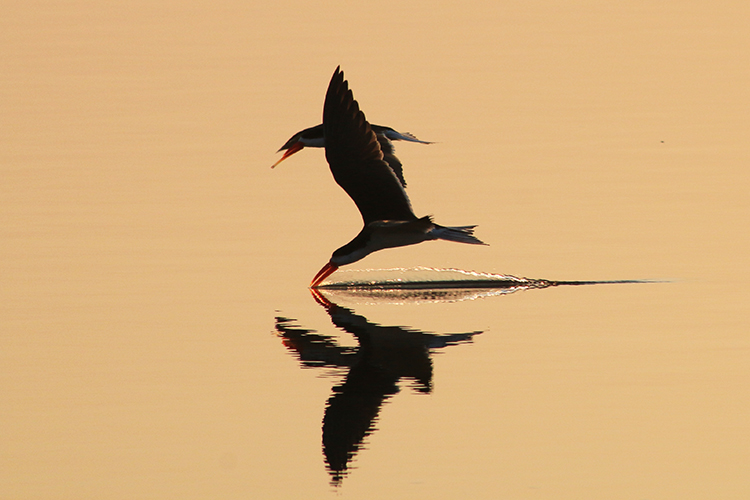 And while our human laws may not (yet) recognise this incredible life force as a living entity deserving of human status, there is another source watching over it, protecting it day in and out. A source with the head of a fish and the body of a snake. A source know as the Nyami Nyami, the great guardian and God of the Zambezi River Valley. One of the most important deities of the Tsonga people, the Nyami Nyami and his wife are said to be the God and Goddess of the underworld, living in the Kariba Gorge. 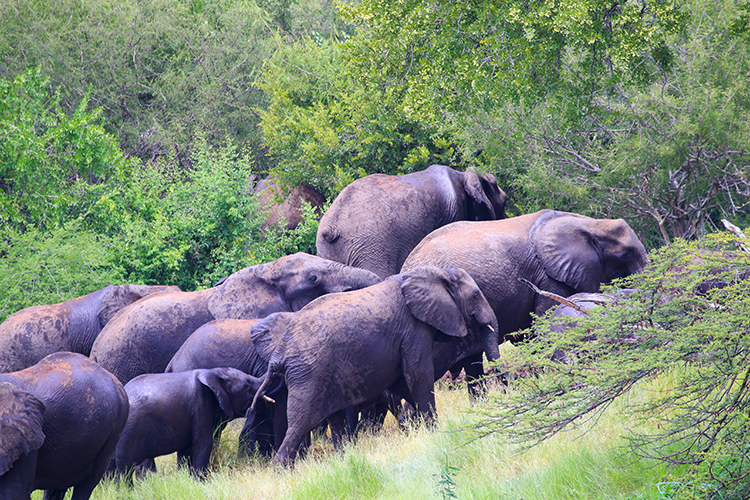 Discover more about our love of the Zambezi in our blogs:

The Making of an Explorer on the Zambezi

Parrot Fishing on the Yemen. Pardon. The Zambezi

In the Company of Cheerful Ladies

Cheers to the Rose-Coloured Glasses of Life

The Butterfly Effect – A Q&A with Tina Aponte

How to Start the Day on the Zambezi 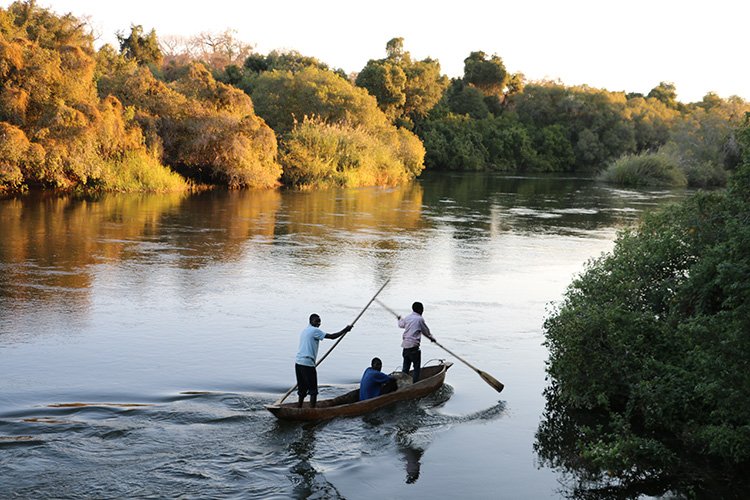