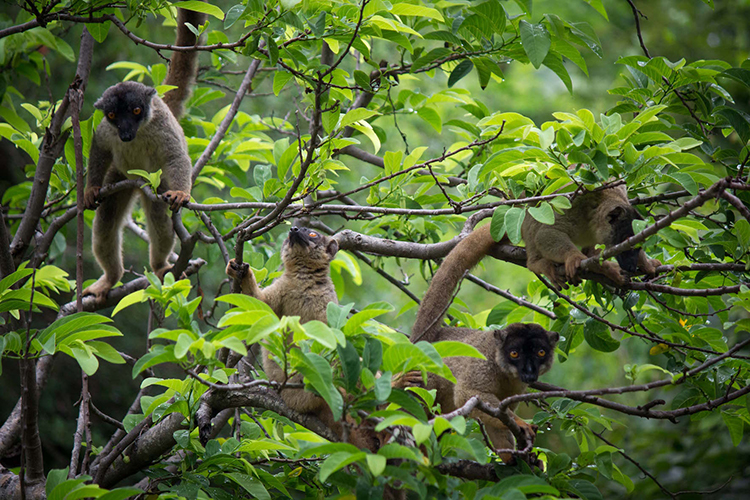 There are many things lemurs can teach us about life. Like how to keep the mystery alive (new species of lemur continue to be discovered even to this day); how to dance like no one’s watching (case in point: the coquerel’s sifaka that make the garden at Anjajavy l’Hôtel their own dance floor, while guests look on from afternoon tea); and how to look at life from different angles (the sifaka are wont to dangle upside-down languidly from tree branches).

Here are 10 more lessons in lemur life that can be observed while at Anjajavy l’Hôtel and exploring the greater island. Consider it The Law of the Lemur, the only self-improvement guide you’ll ever need.

Thank you, lemurs, thank you very much.

It is believed that lemurs first arrived on the island of Madagascar eons ago, via raft – in the most basic sense of the word, “raft”, as in large buoyant logs or floating carpets of vegetation, according to National Geographic. Following their arrival, they continued to live, and evolve, in isolation for centuries.

* Lemurs weren’t the only animals to journey to Madagascar in this way. About 50 million years ago, they were followed by hedgehog-like tenrecs and then mongoose-like carnivores such as the fossa, and finally rodents 24 million years ago. 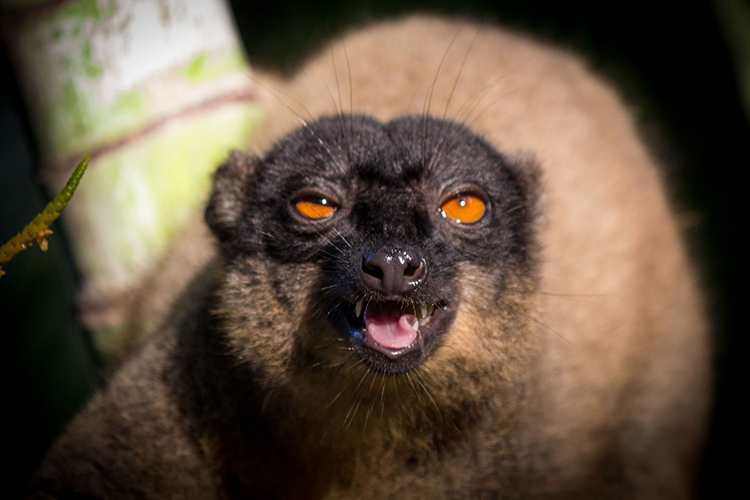 Lemurs are not quiet animals. They like to make themselves known using a range of sounds – from the grunts and swears of brown lemurs and sifaka and the chirps of mouse lemurs to the eerie, wailing call of the indri, which has been likened to a cross between a police siren and the song of a humpback whale, according to Wild Madagascar.

While the different species of lemur each have their own individual diet of choice, lemurs are known to be less fussy when hungry. In these instances, they are known to eat anything edible, whether or not it is their preferred food. Ring-tailed lemur live mainly on fruit, but also eat leaves, flowers, tree bark, and sap. When hunger strikes, insects and small vertebrates will suffice. Opportunistic much? 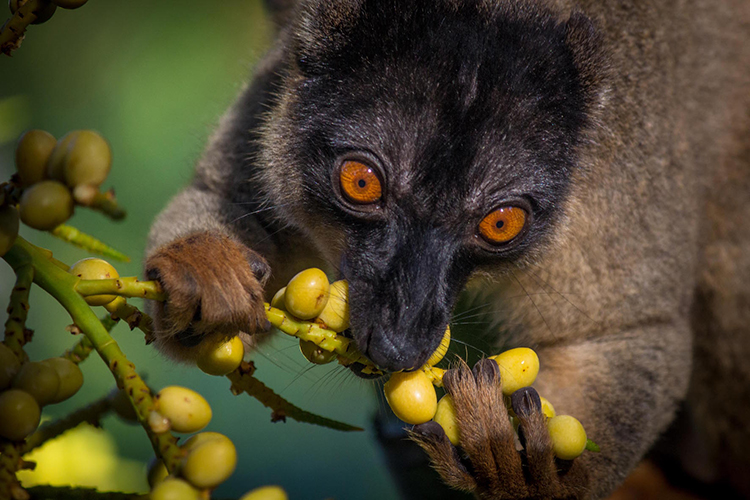 4. Get used to girl power

Females rule the social sphere in lemur scoiety, compared to most other primates and mammals where males are dominant. Read more from: The World Animal Foundation.

5. Use your body language

Lemurs might do well in their own island environment, but they’d never succeed around a poker table. Their facial expressions are distinct and aplenty – the threat stare, the yawn threat, pulled back lips for submission, and pulled back ears along with flared nostrils during scent-marking. Even their tails are in on the action, and help to communicate distance, to warn off neighbouring troops and to locate troop members. 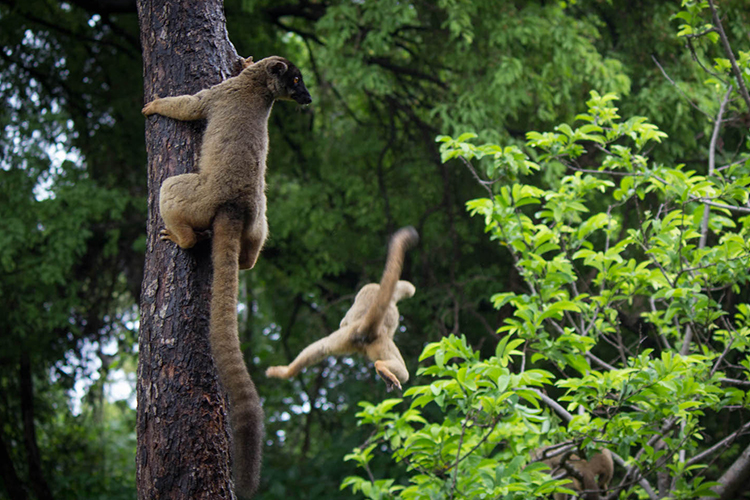 Lemurs are social beings and live in groups that usually include up to 15 individuals. While nocturnal lemurs are mostly solitary, foraging alone at night, they are social during the day, nesting in groups. Similarly, the lone forager dwarf lemur also prefers to sleep among its social group. When not nesting together, lemurs like to keep in touch with their brood through both vocal and physical communication.

7. It doesn’t matter how you do it, just that you do it

…whether it’s trying to run your first 5 km race or taking up salsa dancing. Just look at the sifaka, whose attempts to walk on splayed feet resemble something more like the dance scene in Pulp Fiction. Nonetheless, they continue on their path, hopping sideways on hind legs with bellies thrust out and arms held outward. 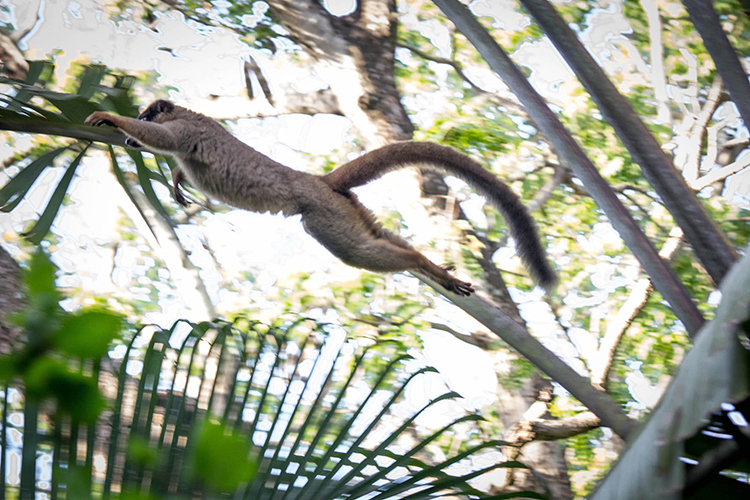 8. Make time for down time

Another of the lemur’s peculiar habits is their own form of hibernation… Madagascar’s fat-tailed dwarf lemur is the only primate known to hibernate for extended periods. The island’s seasonal environment has led to mouse lemurs and dwarf lemurs adopting behavioral cycles of dormancy to match the changes in weather. To conserve energy and water, they lower their metabolic rate and body temperature while hibernating. They also accumulate the fat reserves in their hind legs and the base of their tail before the dry winter season, when food and water are scarce. The ring-tailed lemur, ruffed lemurs and sifakas don’t hibernate, but they are commonly seen sun-tanning, using solar radiation to warm their bodies instead of metabolic heat. 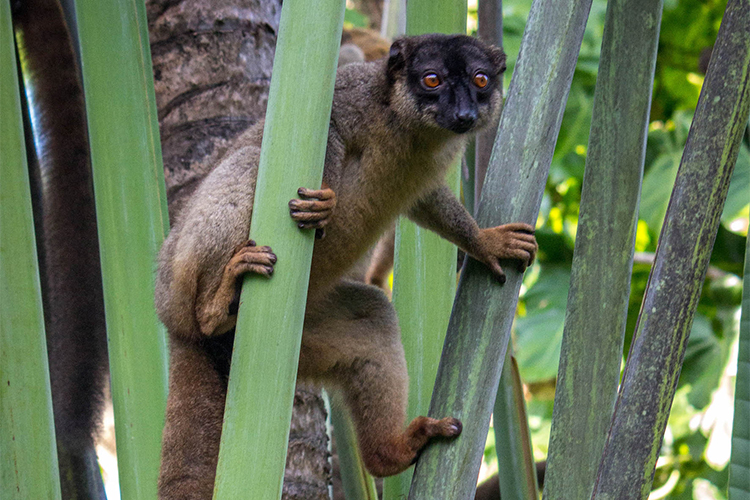 While some might believe the pen to be mightier than the sword, the ring-tailed lemurs prefer to outstink their opponents. Their powerful scent glands emit a unique odour which they use as both a communication tool and a kind of weapon.

“Lemurs mark their territory by scent, serving notice of their presence to all who can smell. During mating season, male lemurs battle for dominance by trying to outstink each other. They cover their long tails with smelly secretions and wave them in the air to determine which animal is more powerful.”

Looks are not everything – the aye-aye proves that very well – but sometimes you just want to fling on a coat and top hat and pretend like the world is but a stage… Like the indri lemur, with its button nose, round ears and small eyes that lead many to compare it to a teddy bear. The red ruffed lemur with its spectacularly rich russet coat. The ring-tailed lemur, its racoon-like black and white fur, continuing down to a series of black and white rings around its tail. Or the unique coquerel’s sifaka with its long, handsome body and bright puppy-dog eyes. 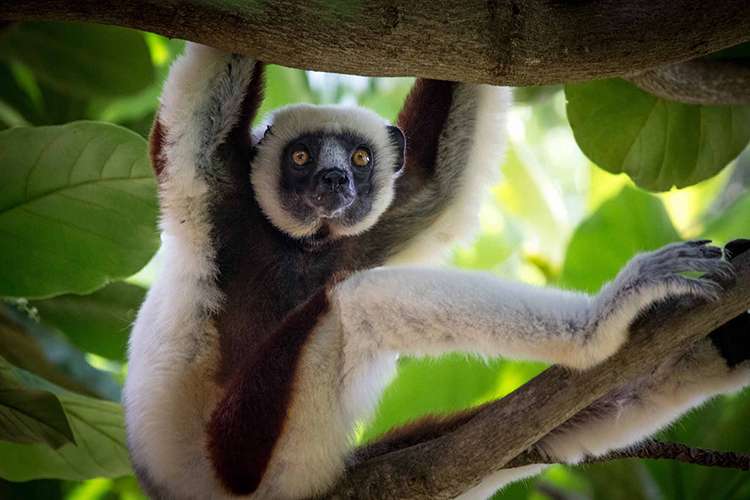 All images courtesy of Anjajavy l’Hôtel