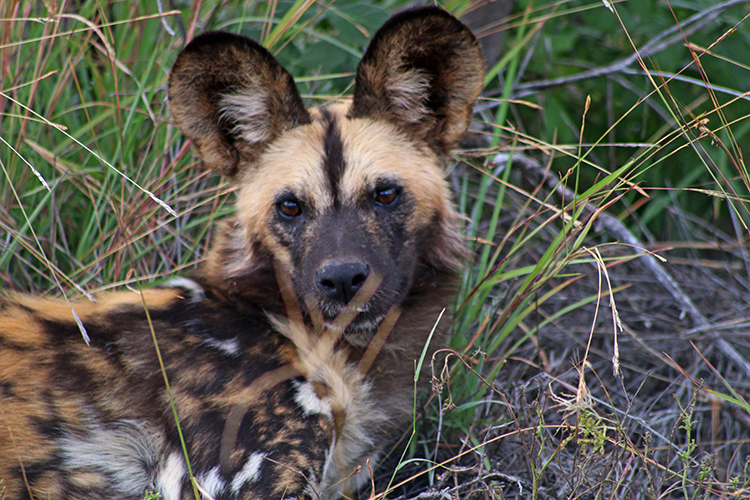 Noun. pack mentality ‎(uncountable)
– The tendency for groups of individuals to act together without planned direction.

When it comes to looks, no two wild dogs are alike. Yet, as unique as the markings of each one’s Pollockian paint splotch coats are, they are “one” in every other way.

Wild dogs are one of the most inter-dependent animals in the African wilderness. The concept, “it takes a village to raise a child” is possibly more germane to this animal than it is to humankind, more “all for one and one for all” than The Three Musketeers themselves.

It is their nature. It is the way of the wild dog.

above: As the sun begins to set the wild dogs become active and mobile and begin their search for prey. Image by Shane Kloeck, Ranger at Morukuru Family.

You can witness the togetherness of wild dog packs in many ways, from their close-knit family life to their masterful hunt.

– Pups are born in a den, where they remain for the first three months of life. The mother is confined to the den while nursing and she relies on other pack members to feed her during that time. They deliver food to her by regurgitation; later on, they regurgitate to the pups as well. Some pack members also ‘baby-sit’ the pups and chase predators from the den, and take care of the old and sick.

– Wild dog females cannot successfully rear pups without assistance and in most cases the pack, rather than the individual, is considered the basic unit within the population. It appears that more pups survive in packs where there are more helpers to assist with their care, but this is not always the case.

– These social carnivores hunt in groups. The pack often approaches herds of prey within several hundred metres, but they select a particular animal only once the chase begins. The pack functions as a hunting unit and the group cooperates closely in killing and mutual defence. Individuals drawn into this group activity are subject to strong discipline during the chase. A regular group leader selects and runs down the prey. They do not run in relays as commonly assumed, as the leader can overtake the fleetest of game usually after 3 to 4 km (1,9 to 2,5 miles) and within 30 minutes after commencing the chase. During the chase, while the others lag behind, one or two dogs run at a distance of 100 m (109 yards) or more behind the leader, and are positioned to intercept the quarry if it circles or begins to dodge. 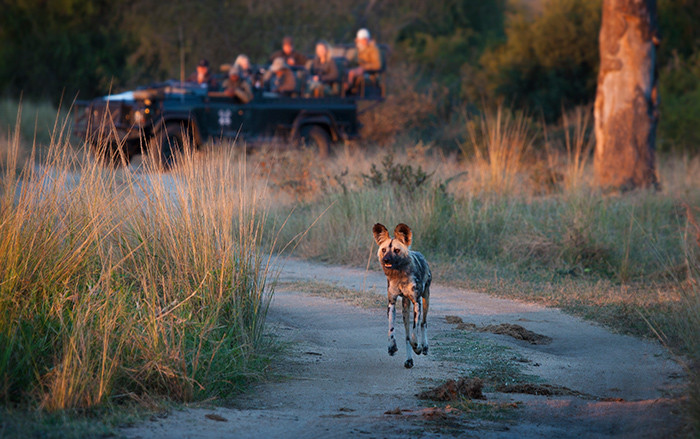 – As soon as small prey is caught, the pack pulls it apart; large antelopes are bitten in the rear and chunks of muscle and connective tissue are torn from them until they collapse because of exhaustion and shock. Juveniles are allowed to feed first after the kill has been made. 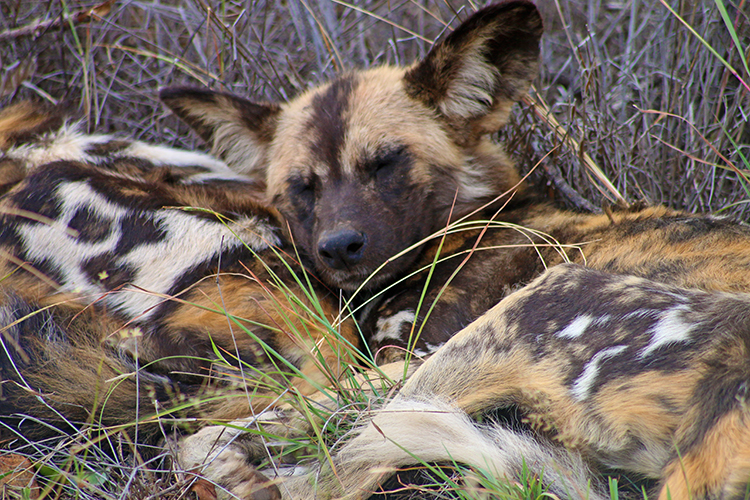 Wild dogs are a reminder to our individualistic societies of the honour and benefit of ubuntu, of our inherent interdependence as a species, no matter how much we believe ourselves to be islands. Like wild dogs, we rely on each other for food, water, care, security… basic human needs, never mind those higher up on Maslow’s pyramid.

One of Africa’s most endangered mammals, the wild dog relies on not only each member of its pack – but mankind too. While there are many other reasons for the diminishing African wild dog populations, most are associated with humans – land clearance; urbanisation; exposure to infectious; shootings and poisoning.

In many areas in South Africa, wild dog conservation projects have meant a return of the dogs to large areas of wilderness, such as the Madikwe Game Reserve where Morukuru Family lies and the Sabi Sand Private Game Reserve – home to Londolozi. Here the dogs have become somewhat accustomed to safari vehicles, letting photographers capture these special animals and their many pack practices.

Meet the wild dogs of the Relais & Chateaux lodges in Africa below. 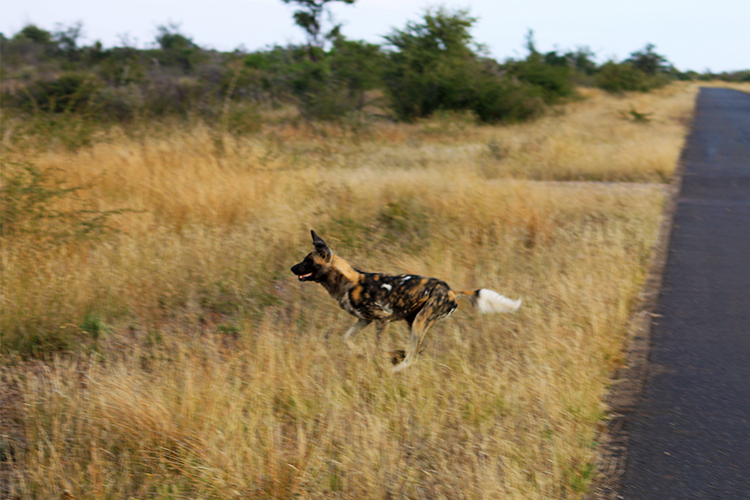 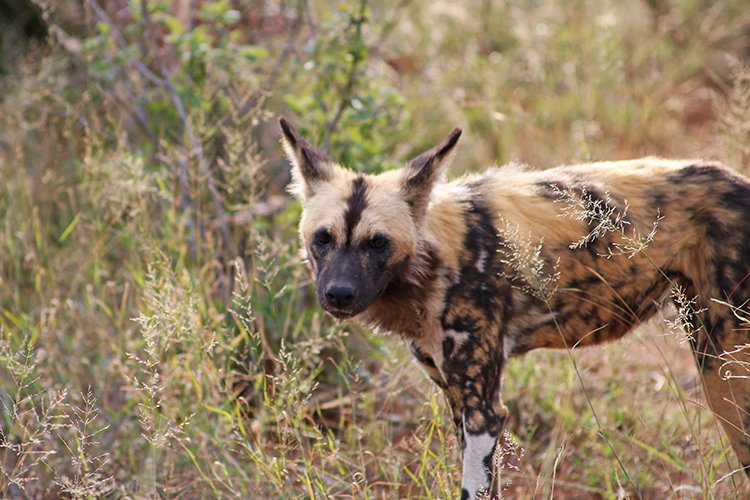 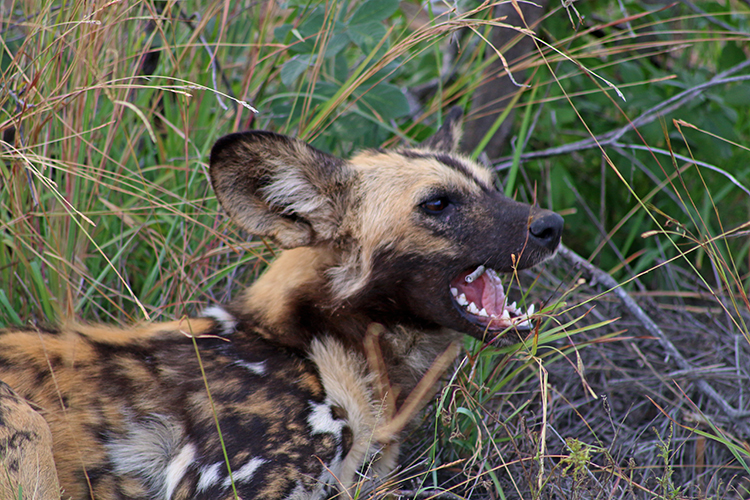 Above: On a recent safari at Morukuru Family, we managed to catch the flash of as two dogs led us through thick bush to a spot under the bushes where the rest of the pack were huddled to keep warm in the cold morning air. 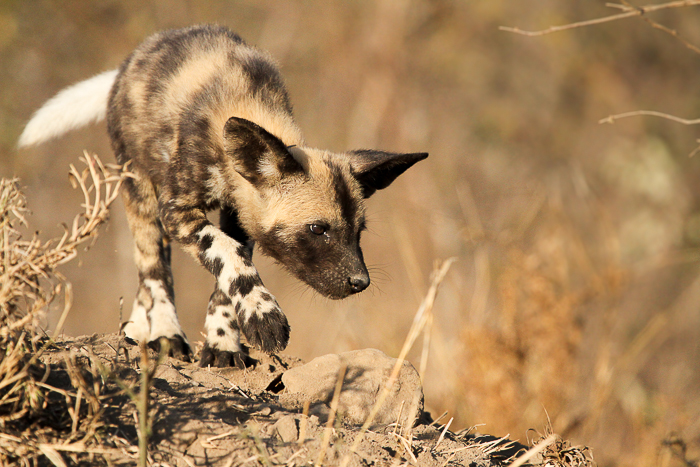 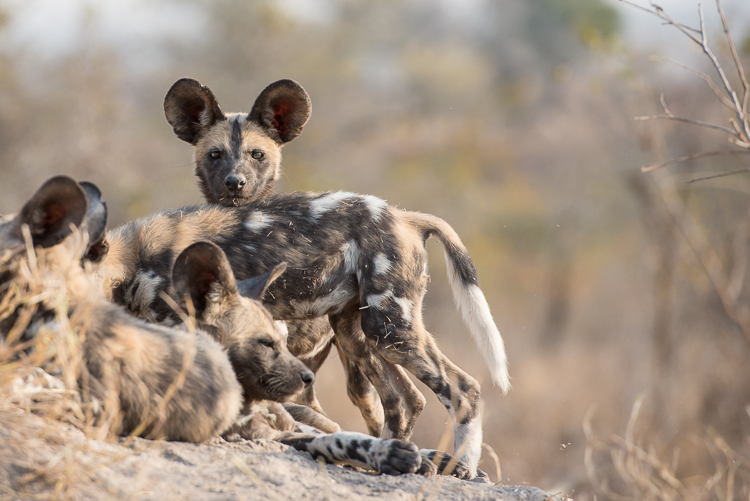 Above: Londolozi Private Game Reserve. Read more in the lodge’s blog, On The Hunt With Wild Dog, and Lessons from the Pack.

In the words of Londolozi Ranger, Andrea Campbell,

“It is a special kind of unit: a unified team so inextricably reliant on each other that they exist as one. From the relay race of hunting, to sharing every meal, to then regurgitating food for the pups, these incredible creatures know exactly what it means to support one another. I have spent time with a pack where one member was suffering from wounds inflicted by a hyena. The other pack members routinely took turns to lick the injured animal’s wounds in an attempt to prevent infection. During denning season, a dutiful babysitter is left with the pups while the rest of the pack move off to hunt. When the pack finally returns, the babysitter is fed along with the pups. This cooperative care is inspiring, and is the embodiment of Ubuntu.” 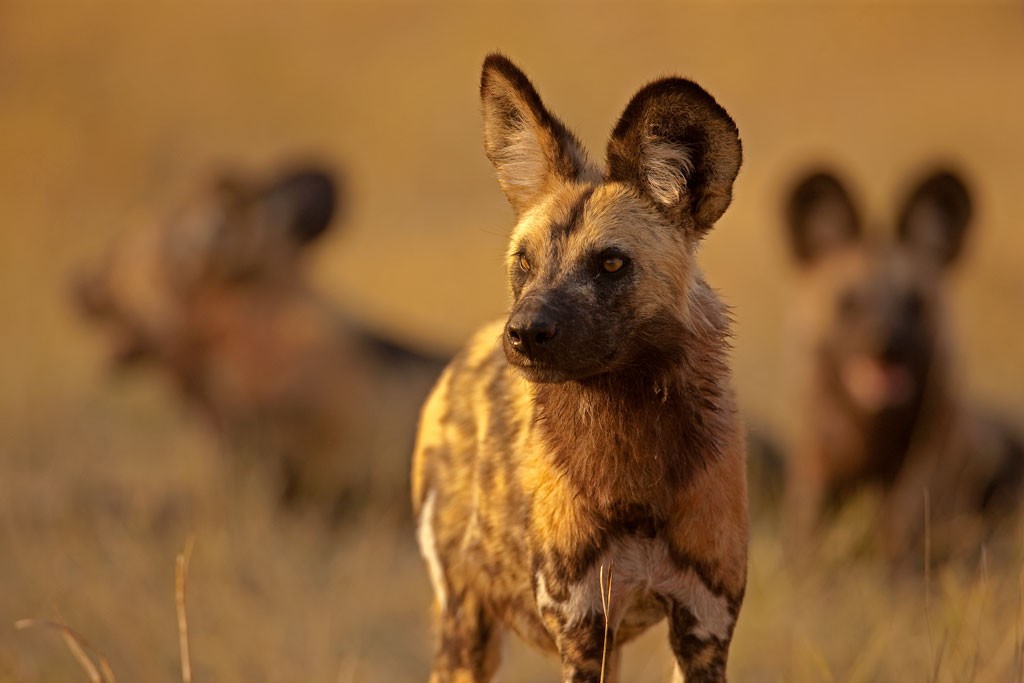 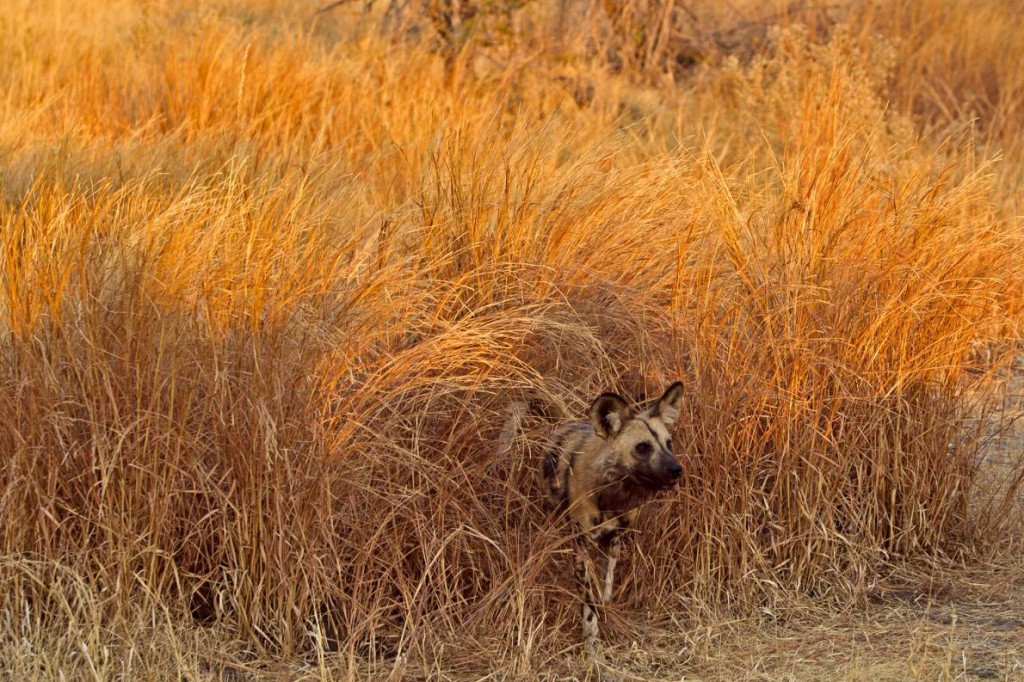 Above: Wild dogs in the Selinda Reserve in Botswana, captured by Beverly Joubert of the Great Plains Conservation.